Full One – Releasing a record means exposing yourself to criticism 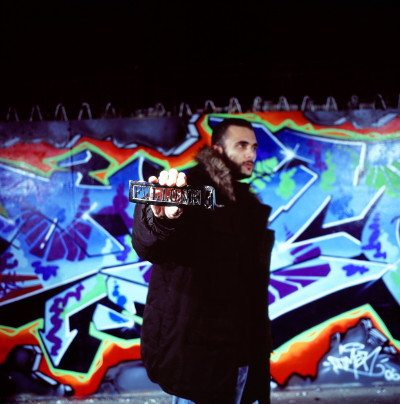 Congratulations on the tenth anniversary of Full One. What does that mean to you, being ten years in the business?

There are few things that you can dedicate ten years of your life. The only thing you can devote more time to is your family. I think it truly illustrates the importance it took in my life. It can’t be categorized as „Business“ or „Passion“, rather as a way of life. So it’s really a great moment for me, 15 years of Hip Hop activism, and the ten-years anniversary of the creation of the label in 2009. A powerful moment.


How did you celebrate the anniversary?

The anniversary was celebrated with various events throughout 2009. The first was to set up a fifteen-track album that had to be ready for January 25th, 2009.
We had to innovate for the ten-years so we came up with the concept of the stencil-sampler. It’s a cardboard sampler that you can cut to read „fullone.com/10th“ and then spray paint it on walls.
Then, I wanted to change the public image of the label by creating new graphics, a new website and a series of video teasers featuring the greatest moments of this past decade.

How did it all start? How did you get into the hip hop culture, and what made you do it with such passion and professionalism?

I entered the Hip Hop through graffiti. I was never a talented graffiti artist, or a guy who had to his credit loads of trains, walls etc. Far from it, it was rather the troublemaking side in the beginning, the thrill seeking but also a strong attraction for the arts that I still have today. Thereafter, I realized that graffiti was part of a set of disciplines. That’s how I discovered the Hip Hop culture.

Over time, I was more into the musical side of it and I wanted to become one of its players. The first form it took was the distribution. I was going to Belgium a lot and back then I established a small import-export network between the two countries. I was buying records in Belgium that I was reselling in Switzerland, and vice versa. I did that for a few years and then I wanted to start producing my own records and taking care of some artists. That’s how I started my first tapes and that the label was created. Somehow each experience led me to undertake the following by giving me a solid foundation.

Any experiences that really hurt you?

Plenty! Releasing a record means exposing yourself to criticism and therefore being at risk to “get hurt”. Some records were real failures. If your only objective is profit then it’s a true failure but it wasn’t the primary objective so you take things more lightly. It hurts but you also learn from your mistakes.

You are both a producer and a label manager. Which one do you prefer?

I tell people as often as possible that I’m not a producer in the sense people usually think. I imagine the beats but I don’t master the tools to create them. It might sound odd but I’ve never had the opportunity or even taken the time to look into that but I’ve always been able to create loops, melodies, to envision the rhythm and make the titles work.
Therefore I work in pairs when I produce, which means that my role is closer to being a conductor rather than a producer of beats technically speaking. To answer your question, it’s impossible for me to differentiate the two activities. I love music and that’s the main element. I’ve been collecting records for years, I’m always digging, listening, analyzing and I produce music either in the form of beats or in the form of projects. The two things are inseparable.

You worked with a lot of rap stars, from France, but also from the US. Any particular anecdote with an artist that stands out?

The recording of the title „Days Are Longer“ with Akhenaton (IAM) will certainly remain one of the most enriching experiences. I went to La Cosca in Marseilles and I spent the whole day there. We came in the studio at 10AM and we finished at 8PM. Artistically it was quite unique because we were able to share a lot, he wrote his lyrics in front of me and I could give him my opinion on his verses, which I considered a great honor. He has a work technique that is impressive and unusual. He records each of his verses three times to then keep the best, without any support or add lips. This is a technique that transcribes a great spontaneity in the flow, and that matches the true essence of Hip Hop. It becomes a raw art again, despite the fact that it happens in a studio. It’s extremely rare to see MC’s capable of doing that and reaching this level. A truly unique experience.

How did Hip Hop and Rap change over the past ten years?

In my opinion I think we can summarize the changes in three major steps.
The first step was this sort of secret society; an emerging and underground movement that people didn’t even know existed.
The second was that desire to be recognized and that legitimate need of wanting to make a living out of it, and therefore to come forward in a more public way.
The third and final one was the fashion, and the money got involved. It became a „mass movement“ without any real solid foundations.

These past few years it became more than a trend and it also started to drift away. Look at the records that are coming out nowadays; according to you does it belong in any way to the Hip Hop culture? The production is flawless, the marketing is perfect, it sells a lot but it’s completely lacking spirit, it’s flat, livid and commercial, without any protest… it’s not Hip Hop anymore.

Is there any dreams you wish to achieve?

There are still some mc’s with whom I want to work but the list gets shorter over time. I also want to complete a graffiti project, I don’t know what exactly yet but my reflection is ongoing…